Why something needs to be done smartly about the homeless 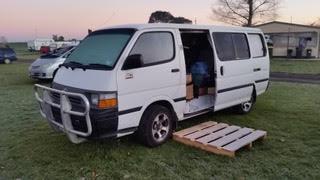 by Gillian Cook of Closing the Gap

Sleeping in her van while holiday park cabins around her are vacant raised the hackles and voice of Maxine Smith.

She made headlines in her hometown of Whakatane for challenging the council’s attitude toward the homeless and with its Holiday Park’s 50-day rule.

Accommodation has been found for her nearly 600km away, in Masterton. That shift was due on 3rd September and with it, goodbyes to her grandchildren.

“It’s cheaper than here but not really affordable unless I get a boarder,” she told Gillian.

Whakatane District Council deputy mayor Judy Turner is quoted as saying social housing is a central government responsibility and council does not have the resources to tackle homelessness in isolation.

To that Maxine says, “it’s as if they don’t have a heart, they don’t actually care about the homeless.,”

Meanwhile, at a social housing meeting in Tauranga in August, Housing New Zealand Regional Manager Darren Toy explained the difficulty of dealing with hundreds of thousands of dollars being required to refit homes that had been used for drug manufacture.

“Ten percent of those in need of housing are creating 80 percent of our problems. How do we solve this?” he asked of his audience. There were no suggestions forthcoming.

But what about the 90 percent who aren’t causing any problems — people like Maxine Smith? Why aren’t they being supported into obvious available accommodation such as the Whakatane Holiday Park’s vacant cabins?

Maxine says she can’t fathom why homeless people are not treated with the same urgency as flood victims. She has faced her district council in person, yet the story remains the same:, the cabins may appear empty, but they’re apparently booked out.

“Why can’t there be ready-made pods put on the land that has been set aside for social housing, get over this emergency and tackle the long-term goals after that.”

Closing the Gaps spokesman Peter Malcolm agrees, saying urgency is an obligation by both local and central government.

“Inequality and homelessness go hand in hand and both are rife in New Zealand – is it any wonder we have housing problems – last year the richest one percent gained 28 percent of the new wealth while the poorest 30 percent got just one percent.

“Until this trend is reversed, our poorest 30 percent will continue to pay the price by being cold in winter.”

Income Equality Aotearoa New Zealand Inc is a national volunteer organisation trying to tackle the wealth inequality and the social problems that it causes. We want a fairer and more equal New Zealand, for all.